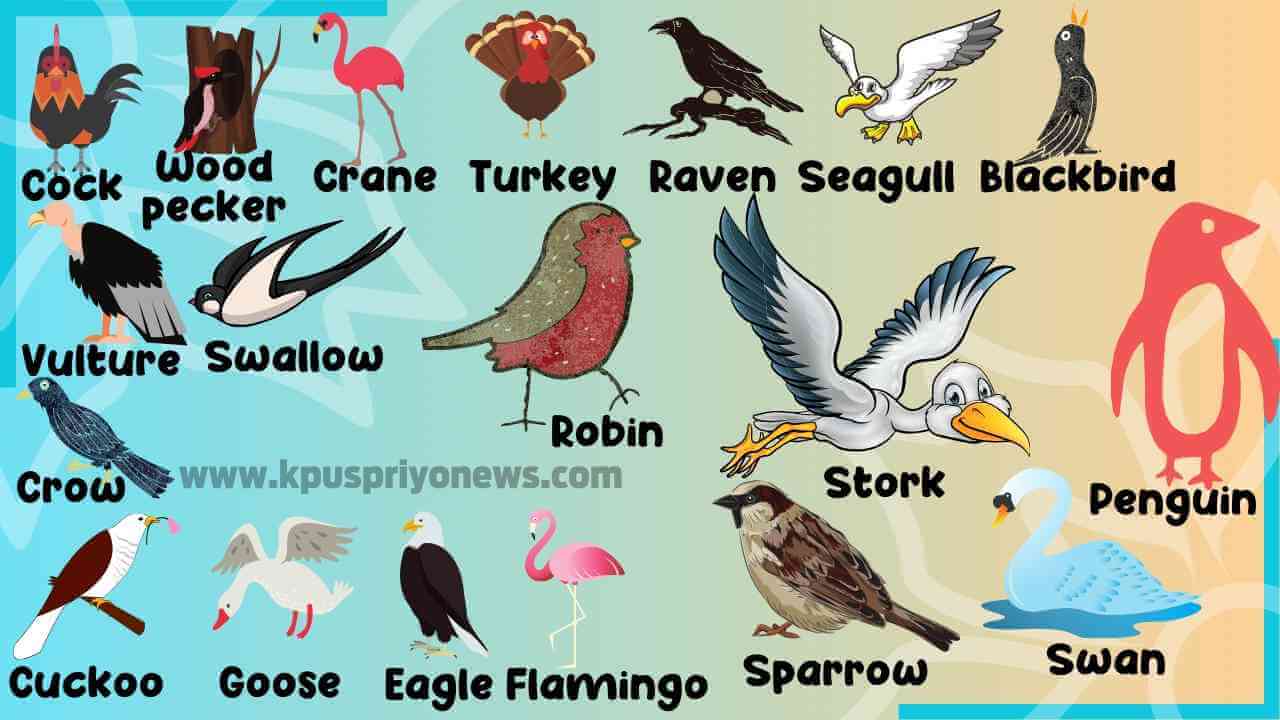 Birds Name: There are many species of birds in the world. It’s a lovely gift by nature. Birds come in many colors. Every people love to see birds. There are some species of birds that are very good at hunting. In this blog-post, we share some bird’s names with Hindi translation and their picture. So, if you are searching for the bird’s name, bookmark our website first, and be with us.

Cranes ) are the tallest giant flying bird in the world and the first name of our birds’ name list. They have long-legged and long-necked. The males and females do not vary in external appearance, but males tend to be slightly larger than females. read more

Crow is the most common bird in the world except South America. This bird is always in black. They are omnivorous and love to eat meat. These are like hunting young and weak animals. read more

Cock is a significant and familiar bird in the world.

Cuckoo is singing birds of our birds’ names list. The scientific name of this bird is Cuculus canorus.

Ducks are swimming birds whose scientific name is Anas platyrhynchos. These can be both in the water and in the ground. They can weigh from one kilo to six kilos. They found in all countries of the world. Know more on Wikipedia

Eagles are one of the fastest and most powerful birds of the rest of the world. These found after more than 74 species in the world. More than 60 species found in Africa, Asia. Some other species found in different places around the globe. This powerful bird can fly from the ground to the heights of about 12000, and the speed of flying is also breakneck. So, we added it to our birds name list.

The goose is a magnificent bird living in the water, which is much larger than other birds.

Generally, we know cheetah at its high speed, but elsewhere there are animal birds name which recognized for rate in their ranges Hawk is one of them.

The hen is the

Kingfisher is a small-sized bird of our bird’s name list and very beautiful to see. This bird called

Until some time ago, these Kite birds whose scientific name is Milvus migrans were very many, but nowadays, these birds have reduced very much.

The beautiful Nightangle bird is about 15 to 25 centimeters in size.

Ostrich is one of the big birds in the world.

In the ice-covered South part of the world where most of the animals can’t survive, that place is a haven for Penguins. This bird can’t fly but can swim in the sea and eat sea animals. read more

Pigeons love to live with Human civilization, which is very sophisticated and intelligent. These birds are available whole over the world expect The Sahara Desert and Antarctica. read more

These birds are mostly available in hot countries. Generally, the parrot’s wings are green, and a red color thought. read more

Peacock bird is famous for its beauty and the national bird of India also. It is considered a symbol of beauty. This bird has an excellent long blue nack and wings. read more

Partridge is a well-known beautiful bird. These birds mostly found in India, Pakistan, Iran, Nepal, and Srilanka. Partridge is omnivorous, and it eats grains as well as insects. read more

The Robin Bird has seen around the human settlement. This bird always sings on the tree trunk. This bird is hungry and spends its life eating insects. It consumes an enormous amount of insects and protects our crops from insects. read more

The swan bird is white and has a long nack.

Sparrow is a widespread small bird whose color is brown and grey, with a short tail.

Woodpecker is a lovely bird in our birds name list.

Vulture is a hunting bird who loves to eat dead animals. A unique feature in the body of the vulture is that they are bald head and featherless. It is the last of Bird’s name list. Read more

So, guys, thats all about birds name, here we try to describe some birds name with their scientific name, Hindi translation, and their image. If you are satisfied with this post, then comment below. Now you can share this post about birds name on social media for your friends. Thank you.